What is the Great American Migration of 2020? 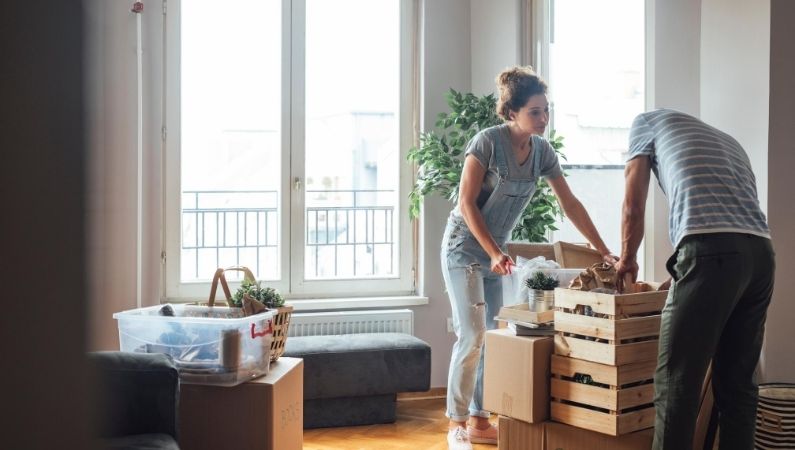 The coronavirus pandemic has changed a lot about our way of living. Masks are a new way of life, quarantining is still a necessity for many and Zoom calls are the new happy hour. One of the biggest changes to our economy and to the real estate market is what some housing experts are calling the Great American Migration of 2020. This is the recent and ongoing exodus of large numbers of people from densely populated urban areas to suburbs, small cities, and rural towns in search of space, affordable housing, and a different way of living.

What is the Great American Migration of 2020?

The real estate market initially came to a semi-standstill in March when shelter-in-place orders were issued in states across the country and all but the most essential businesses closed. However, it didn’t take long for the housing industry to get back on its feet and adapt to “the new normal” using new safety precautions and virtual technology to ensure buyers and sellers could still do business. The drop in interest rates after the Federal Reserve’s move to buy mortgage-backed bonds and the release in pent-up housing activity saw the real estate market stabilize and a delayed spring market take off in most areas of the country.

The biggest trend housing experts have noticed over the last five months or so is the large movement of people from dense urban areas to the suburbs or smaller cities. Movement to the suburbs is not a new concept; suburbanization has been a hallmark of American life since the 1950s. But this new mass movement is in part spurred on by the coronavirus pandemic and its subsequent economic and social effects. Some decry the movement as a “pandemic event” that won’t last once the economy stabilizes and people feel safe. However, the data is starting to show this “trend” may just be a significant shift in the housing landscape.

According to realtor.com‘s Cross Market Demand Report, 51 percent of home searches by urban residents in the 100 largest metropolises in the second quarter of this year were for suburban homes near their cities- an all-time high since realtor.com started keeping track in 2017. The Northeast has seen the most traffic in this area. In New York, 58.1 percent of listing views from urban New Yorkers were for suburban homes, which makes sense as New York City has been one of the areas hardest hit by the coronavirus.

However, this recent development won’t be limited to New York. Most major metros across the country should expect to see this kind of shift from urban to suburban living.

“As states, cities, and counties around the country slowly reopen, we predict the great American move. For safety reasons, financial prospects, life change improvements, personal comfort, and employment. We expect a surge in household and business relocations over the next few months…”

This is the Great American Migration of 2020 and it will have lasting effects on the economies and housing markets of big cities, suburbs and small cities alike.

What is Causing the Great American Migration of 2020?

The desire to seek wide-open spaces is nothing new in American history. But the coronavirus pandemic has hastened along a broader movement that will have a sustained impact on the real estate markets and lifestyles of Americans across the country.

“The movement we’re seeing now is not just a reaction to one pandemic,” Joel Kotkin, who studies how and why people move and wrote about the “Coming Age of Dispersion” at newgeography.com, told The Washington Post. “There will be a longer impact, an acceleration of the process that was already starting. The work-at-home trend was already building, the small towns were already becoming much more cosmopolitan, with more and better coffee places and restaurants, and the big cities were already becoming prohibitively expensive.”

When the coronavirus pandemic first hit the biggest cities in the country- New York City, Seattle, San Francisco, Los Angeles, Chicago- the populations were rocked by a fierce disease that left hundreds of thousands hospitalized and everyone else sheltering in place. This was in addition to a wave of layoffs, furloughs and massive pay cuts that accompanied that economic fallout of the pandemic.

As many workers are no longer required to report to a physical office, the realities of working from home and quarantining every day are hitting home in a new way. Many urban dwellers who were previously happy to trade a spacious or affordable home for proximity and access to trendy downtown amenities are now questioning if life stuck inside a small, expensive downtown apartment is right for them.

“…staying in the city would become harder to justify, some young people said. They put up with the challenges — exorbitant rents for tiny living spaces is a chief one — because of what New York offers: world-class restaurants, acclaimed Broadway shows, renowned cultural institutions and bountiful parks. But much of that is now closed, and it is unclear what those venues will look like when they reopen.”

The Appeal of the Suburbs

Many millennials in their 20s and 30s decided their best option was to flee the big cities during the worst of the first wave until they could safely live in the city again or find a new job. There are no exact numbers for how many people have left these cities in March and April and economists and social scientists probably won’t know for some time. Many who fled with the intention to return when it became safer may realize the benefits of living in a suburb outweigh the benefits of living in a big city, especially during a national crisis like a pandemic.

These urban dwellers are also starting to realize how much house they can get for their money outside of big metropolises with traditionally inflated rent markets, especially as work-from-home becomes a permanent reality for many. Low interest rates coupled with lower costs of living have made many who fled the cities decide to put down roots elsewhere.

There are plenty of people who would have made the move to the suburbs anyway. According to The Atlantic, tens of thousands of people move out of New York City every year to pursue new careers, grow their families in more affordable places and to live somewhere with more space. The coronavirus pandemic accelerated the mass exodus of this group that might otherwise have taken longer to leave.

NBC News interviewed housing experts on the behavior and real estate needs of the urban dwellers leaving the cities.

“I think it’s the beginning of a secular shift in household behavior,” said Ken Leon, director of equity research at the research firm CFRA. “These are residents of high-rise living, in mostly urban markets, who are more actively looking for the suburbs for single-family homes — both for growing families because the millennials are aging and also for safety in terms of COVID-19.”

“You see that typical migration when people start having kids, but I think now it’s something you’re seeing just more than ever,” said Caroline Nelson, a broker at Compass Real Estate in Marin County, California. “People that were happy with urban living — this changed everything, because people realized they wanted space.”

None of this is to say that a metropolis like New York City will suddenly be empty one day as everyone leaves. But the infrastructure and housing and rental markets of these big cities across the country will irrevocably shift as millennials, who were always going to hit the market at some point, are now hastened by a pandemic and the realization that they need more living space in an affordable community if they are going to work and live in an increasingly socially distanced and virtual world.

“You’ll still have urban centers,” Kotkin told The Washington Post. “But they’ll be less intense and more dispersed. You’ll no longer have to choose between unaffordable, overcrowded cities and incredibly boring countryside. There will be a more attractive middle ground.”

Will This Affect the Cost of Living in Suburbs and Smaller Cities?

The big question on many local REALTORS®’ minds is how will the Great American Migration affect the cost of living and the housing markets in areas that are prime locations for those fleeing the cities?

The Impact on Home Sellers and Buyers

This move to smaller cities might just be great news for local home sellers because it increases the number of interested buyers who may purchase their homes. But inventory is at an all-time low across the country. An increase in the number of buyers vying for a property would increase buyer competition which could potentially drive up home prices while shutting out some buyers who don’t have the ability to offer cash or have the same urgent need to find housing.

“We’ve seen some upward pricing pressure, and the inventory is low,” Michelle Pfeffer, a broker at Better Homes & Gardens Rand Realty in New York, told NBC News. “If you’re a homeowner now, your values are going up. That can be a great thing. On the flip side, if you’re a buyer and you’re searching in the median price point, it’s super-competitive.”

It could also affect the rental markets in smaller cities. Not everyone leaving the big urban areas is ready to buy a house. As rental markets in San Francisco, New York City, Boston, and San Jose all contract, we could see an increase in the cost of renting in smaller markets as new renters move into town and demand goes up. Some of the people who initially fled in March and April could decide to return once the cities are deemed safer to live in. It all remains to be seen.

How Will the Real Estate Market in Iowa Be Affected?

“All real estate is local. What drives trends nationwide doesn’t always land the same in all regions,” said Dylan De Bruin, broker-owner of CENTURY 21 Signature Real Estate in Central Iowa. “That said, work-from-home, COVID-19, and the changes nationwide will have some impact locally.”

It’s important to remember that the coronavirus pandemic is still not over and its effects and subsequent economic impacts and government stimulus efforts won’t be measurable for a long time. The Great American Migration of 2020 is an ongoing, fluid social and economic movement that may progress for several more years. We will continue to monitor its effect on the real estate market, especially as it relates to our local Iowa markets.